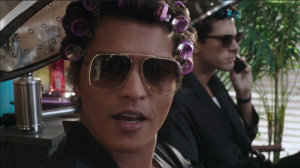 Recycled sounds have always been a fundamental part of pop music, but sometimes a borrowed beat or melody is shockingly indisputable. This week we got an especially clear example when the blue-eyed soul singer Sam Smith agreed to give classic rockers Tom Petty and Jeff Lynne a 12.5 percent writing credit on his Grammy-nominated song “Stay With Me,” because its chorus sounds so similar to Petty’s 1989 hit “Won’t Back Down.”

Read and listen to the feature on NPR